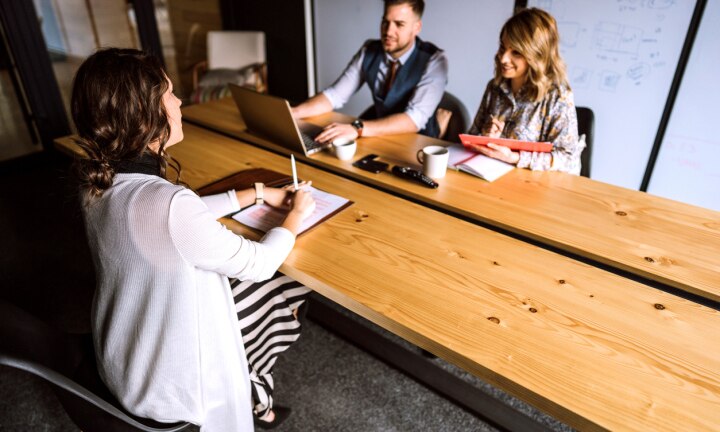 If being laid off and scrambling to find a new job isn’t stressful enough, imagine having to do it when you’re expecting a baby.

That’s the predicament Karin Zannella, 35, of Fairfield, Conn., found herself in while pregnant with her first child in 2011. Though she was just eight weeks along (and wasn’t showing yet), Zannella decided to inform both companies she interviewed with for a new job. “I was very nervous, as I knew I could be risking my shot at either job, but I knew that it was the right thing to do to ensure it was the right fit—both short term and long term,” says Zannella, who is now a senior manager of customer marketing and sales planning for a major food brand.

She wanted to use her pregnancy news as an opportunity to ask each employer about their willingness to let her work from home two days after her baby arrived, so she told them over the phone before her third round of interviews.

“I could have kept it quiet until I was hired and well into my second trimester. But I felt that it was important to be upfront and honest from the start in order to gauge how each would respond to my situation,” says Zannella.

In the end, her honesty paid off. Both companies responded that her pregnancy news didn’t affect her candidacy—and she ultimately received two offers. She accepted the one that gave her the best flexibility.

Zannella’s story is the best-case scenario. But are other pregnant women as fortunate? While employers are legally barred from treating pregnant women differently than other candidates under the aptly named Pregnancy DiscriminationAct (which was created in 1978 largely as a result of said discrimination), we talked to career and legal experts who say telling a prospective employer you’re expecting isn’t always the best move.

Of course there’s no one-size-fits-all rule when it comes to a topic as delicate as this. Here’s what you need to know when deciding if—or when—to reveal your pregnancy during a job search

Should You Share During an Interview? What to Consider

Interviewing for a job during a pregnancy certainly isn’t a new scenario, but it may be more visible than in earlier generations, with more women in the workforce—and in executive roles. Perhaps a sign of the times, Yahoo! C.E.O. Marissa Mayer was appointed to her executive post when she was about six months pregnant.

“I think what you may be seeing is more women who are daring to have children while employed in the higher-level jobs like consulting, law, medicine, finance and the like,” says Victoria Pynchon, co-founder of She Negotiates, which offers career and salary strategies for women.

“Many women of [the 1980s and 1990s] generation delayed our childbearing years because those who came before told us not to have children until we ‘made partner’ or the equivalent in academics, medicine or business,” she says.

What the Statistics Show

Although whether to disclose your pregnancy during a job search is a personal decision, women may find some direction from studying the statistics. Some evidence indicates that announcing your pregnancy before getting the job offer could hurt your career prospects.

So while women today can look to Mayer and other high-level employees as successful examples of climbing the ladder while carrying a child, the question remains: When is it right to tell?

Katie Donovan, a salary negotiation consultant and founder of Equal Pay Negotiations, LLC, reiterates that it’s illegal for a potential employer to ask whether a candidate is pregnant or plans to get pregnant—but they can ask if there are any reasons you would have problems performing your duties. For example, if you’re on your feet all day—that may prove more challenging throughout a pregnancy than if you have an office-based desk job.

While Donovan typically doesn’t recommend disclosing your pregnancy during the interview process—rather, she suggests waiting until you start your job—she does recognize the need to share the news in certain circumstances.

“If your pregnancy would impact your ability to do the job, then you would need to speak up,” Donovan advises, adding that this should happen during the first interview.

Other factors to consider are how far along you are and whether you have a visible baby bump.

Pynchon recalls a client who was expecting a baby via surrogate and decided not to disclose her news while interviewing for a new job.

“Her surrogate wasn’t yet three months along, and the incidence of miscarriages in the first [trimester] is very high, so she said she could no more say she was going to avail herself of maternity leave than someone else could predict that they were going to have a heart attack and avail themselves of medical leave,” Pynchon recalls.

Although she was in her second trimester, Courtney Parker, a 28-year-old nurse practitioner who lives in Newtown, Conn., decided to keep her pregnancy news to herself too. At 24 weeks, Parker opted to hide her baby bump under loose clothing and wore a scarf to take attention off her figure when she interviewed for a job at a medical clinic.

“I felt guilty not telling them during the interview because everyone who interviewed me was so nice, but I didn’t want it to affect their decision to hire me,” says Parker. “I wasn’t so nervous about them worrying if I could perform my job while pregnant, but moreso that I knew I wanted to take 12 weeks of maternity leave and wasn’t sure how they would feel about it.”

While Parker knew she’d be entitled up to 12 weeks of unpaid leave under theFamily Leave Medical Act and six to eight weeks of paid short-term disability benefits (which some employers offer), that didn’t make the moment she decided to reveal her pregnancy at 28 weeks—on the phone after they offered her the position—any easier.

“I apologized for springing it on them but explained I wanted to be honest from the beginning,” Parker says. Fortunately, they were supportive. “They wanted to get me started ASAP so I had enough time to be oriented and comfortable in the position before I went on leave.”

A 2013 study from researchers at Rice University, the University of Houston-Downtown and George Mason University, which sought to measure discrimination against pregnant job applicants, revealed these candidates receive more interpersonal hostility—such as employers or managers prematurely ending the conversation, pursing their lips or treating them rudely—than non-pregnant applicants.

But the good news is the research also revealed that when pregnant job applicants address these stereotypes when inquiring about jobs—particularly their personal levels of commitment and flexibility—they are nearly three times less likely to experience interpersonal discrimination than pregnant applicants who say nothing to combat pregnancy stereotypes.

Bottom line? If you’re proactive in explaining how you’ll be successful in your position despite your pregnancy, you’re more likely to have better prospects.

Another recent study in the United Kingdom revealed that 76% of male and female managers surveyed would not hire a woman if they knew she would become pregnant in the next six months.

Pynchon says employers are likely to get away with that behavior because, even though it’s illegal, a women’s ability to prove this discrimination is slim to none—which is why she doesn’t recommend that her clients disclose their pregnancies in the interview process, or, even better, until they start working.

“There are simply too many factors that go into a company’s decision to hire someone to [discount] the extremely high likelihood that an employer would hire someone who’s not pregnant in the place of someone who is,” Pynchon says. “I’ve had employers tell me, off the record, that between two candidates of absolutely equal qualifications, they would hire a man over a woman because ‘women get pregnant.’”

Though she notes that not all employers feel this way, Pynchon says based on her corporate litigation experience, she doubts HR would green-light a pregnant woman’s hire if they had a choice—though no notation of the pregnancy would be made in corporate records.

At whatever point you decide to share your pregnancy news, make sure you’re prepared to explain how far along you are, your expected due date and your plan for returning to work. This is also a good time to discuss in detail your company’s maternity leave policy and whether you can take advantage of a more flexible schedule once your official leave is over.

Karen Sommer Shalett, a 38-year-old journalist who lives in Washington, D.C., with her husband and two children, interviewed for editor positions during both of her pregnancies—the second time for DC Magazine, a fashion and lifestyle publication, when she was five months along. What made the difference in how she was perceived, she believes, was the way she confidently embraced her commitment to being a working mom.

“I thought, You know what? I can’t disguise I am pregnant, but I can certainly show that I am as stylish as the publication and still dress in a way that suits the job—pregnant or not,” she says.

“I thought it was very important when I sat down to not make it the first thing I talked about, but to definitely make it something I talk about before the [first] interview was over,” she says. “At the first opportunity to ask a question, I said, ‘OK, let’s talk about the elephant in the room. I am pregnant. I have another child, so I’m not going anywhere. Naturally, I expect to have maternity leave, but I plan to spend the next four months putting the infrastructure in place so the impact is minimal.’”

Even if you opt to share your news after the interview process is over and you’ve started working, Donovan says to emulate Sommer Shalett’s upbeat, positive confidence. “Your own words should help set up [the employer’s] positive reaction,” Donovan says.

Then, she says, be prepared to share your thoughts on how your work will be covered while you’re gone and how you’ll prepare to minimize the impact of your absence.

One thing you should never do? Apologize for your pregnancy or intent to take maternity leave—no matter when you ultimately decide to disclose the news. “Maternity leave is your right,” Donovan says. “Never apologize for using it.”