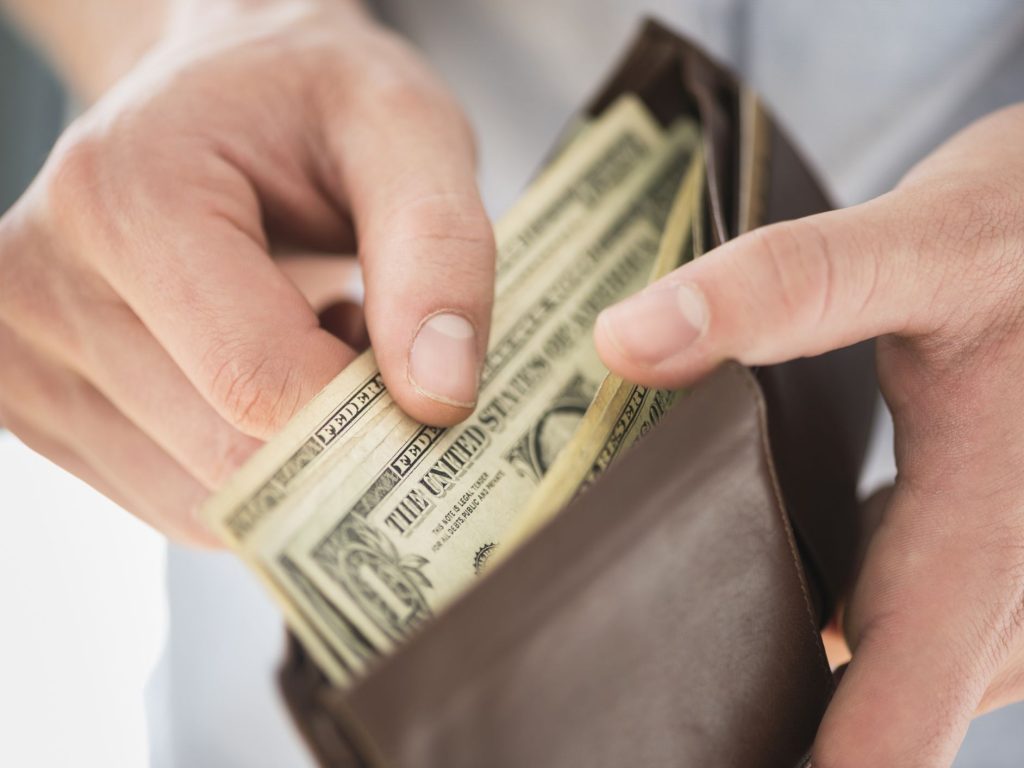 After the first of the year, I decided I wanted to make a financial change in my life. Not only did I think that as a woman in my midthirties it was time, but as a woman who will be getting married in May, I thought I owed it to both myself and my future husband to get things in order.

I’ve written about my struggles with being a responsible consumer before. And although I like to believe I’ve come far since the wild spending days of my early twenties, I know that, for me, deciphering the difference between need and want will always be difficult. I realize that, for some, this may seem ridiculous, and I concede that it is, it REALLY is, but it’s still a fact. As a result, I only have my Bloomingdale’s card and one credit card as a means to both rebuild my credit and for emergency purposes.

Since I didn’t owe anyone any money, and I wasn’t racking up massive debit every time I left the house, I felt I had things relatively in order. I was wrong. It was a year-end look back at the past several months that showed me just how much of a “big” spender I really am.

A word about my finances: As a full-time freelance writer, I’m not exactly rolling in the dough, but I do make enough to pay what needs to be paid, then have some fun. I have a bit of savings, some inheritance in there too, and I know that if I stopped working I’d be fine for a bit, but not for several years or anything. Not having an official retirement fund, especially since I’m in my thirties, does make me nervous when I think of the big picture, but the problem with me is I rarely look at the big picture, so nothing has moved me to do something about it just yet.

As a New Yorker I spend way too much money on, well, everything. I’m not saying that being a New Yorker is an excuse, but with a new restaurant opening practically every day and a world of boutiques, literally, at your doorstep, the opportunity to spend money—and spend a lot of it—is everywhere.

It was after several months of blowing between $800 and $1,200 on food alone, that I realized it was time for a change. Could I afford it? Not exactly. I’d spend and spend with my debit card, move on to my credit card, then at the end of the month make amends thanks to my inheritance. It was such a waste. Then the new month started and it was time to do it again.

Horrible, horrible idea. My inheritance was not meant to allow me to go out to dinner every night of the week; it’s meant for something more—for lack of a better word—responsible. Although it was not a resolution, per se, I resolved to give not just plastic the boot but my debit card too. I was going strictly cash-only into 2014, and I knew I’d be better for it.

My Initial Plan of Attack

After taking a long hard look at my spending habits, I realized the first thing that needed to be cut from my life was Seamless.com. If I wasn’t out spending money on a restaurant—and I do go out with friends three to four times a week for dinner—I was spending it on delivery. So I deleted my debit card information from there … only to re-add it again a few days later, but eventually stuck to it. I could definitely cut back on my calorie intake too.

Next, I took control of the entire “going out to dinner all the time” nonsense. According to my mother, “No one has to go out to dinner that many times a week! Who do you think you are? Anna Wintour?” Well, in my dreams, yes, but I guess in reality, no. So dinner dates with friends were cut in half, and I forced myself to actually open the cookbooks I’d been given over the years from family members. I realized I actually do know my way around the kitchen, though I’ll never, ever be Julia Child. But, really, who is?

Although I had made those amendments to my life, it still wasn’t as though I could never leave my apartment. I mean, I had to leave at some point or another, because being a creepy recluse like Boo Radley is only cool in literature. I did something that I never thought possible: put myself on a $30 a day budget and leave my debit card at home. This meant two things: If I was out, I’d have to go home once my $30 was gone, and if I was planning to meet a friend for dinner later in the week, I’d have to skip spending money earlier in the week. Unless it was a “special” occasion, I never had more than $30 on me.

The Bumps Along the Way

Knowing that you only have $30 on your person can be scary. As a fairly anxious person, in the early days of my cash-only life, I always assumed the worst possible thing would happen to me.

Like, what if I was in a remote neighborhood of Brooklyn, a snowstorm came, and the mayor decided to shut down the subway?

My mind went to wild places: I mean, obviously the odds were I’d have spent most of my $30 on lunch.  But if the whole subway system had been shut down, then I wouldn’t be able to afford a cab, and I’d have to walk home in a snowstorm! That’s easily a two-hour walk! And what if it was a blinding snowstorm? What then? Would I just die in a snow bank somewhere, a voice of her generation silenced because of snow and a seemingly responsible decision that ended up being her demise?

However, it didn’t take me long to realize just how obnoxiously privileged these thoughts were, and that to whine about them as if they were the end of the world was not only disgusting but insulting to those who couldn’t conceive of affording even my newly “limited” lifestyle. So I shut up and stuck to my plan.

When the end of January rolled around, I was as excited as a kid at Christmas. I wanted to see just how much I had spent and saved, and how many fewer restaurant charges would appear on my statements.

After deducting the necessary expenses of rent, electricity, groceries, internet and phone from what I spent over the 31 days of January, I realized I had spent just under $400 on that other “stuff.” Completely unbelievable, right? I attributed most of this to the month of January being a total bust, weather wise.

As someone who works from home, I enjoy going out every morning to get my coffee and breakfast sandwich (a habit that would have been cut thanks to my $30 a day anyway), but because the weather was that cold, I actually preferred to drink my bad coffee rather than step outside. I guess I can thank Mother Nature for this one.

However, there were also lessons learned. I realized that having only $30 in my pocket a day isn’t a scary thing. I faced the fact that not having a credit card or debit card when I’m out drinking is probably the smartest thing in the world, because once I get tipsy, I’ll just keep spending and, “Hey, why not buy a round for my new best friend here?”

I realized that being forced to save up for a purchase, whether it was a night out at a new restaurant with friends or a materialistic item (although I cut that completely out of my January behavior), makes it so much sweeter to enjoy. My parents had been telling me my whole life that there’s great pleasure in reaping the benefits for your hard work, and I’d always scoffed at it, but it’s true: Filet mignon drizzled in béarnaise sauce really does taste so much better after days and days of canned soup or pasta. I not only scored financially, but emotionally too.

Where I’m Headed From Here

Although I know once I sit down and look at February’s spending, it won’t differ much from January; with March just around the corner, that will be a completely different scenario. While I’ve come to understand that yes, I can do this; I can sustain and still have some fun on a cash-only life, I fear that spring—outdoor brunches, dinners in the lovely back gardens of some of NYC’s restaurants—will have something else in store for me.

However, it’s comforting to know that I am capable of positive change. It’s a good feeling to look at what was spent in December compared to what was spent in January and feel this wave of relief. I can put that money toward my honeymoon or start a joint savings account with my husband—I can be responsible.

I know that I will never be a role model for the financially fit out there, but step by step I’m making strides in getting to a place where I not only finally understand need from want, but the awful weight of guilt over wasteful spending is a thing of the past.